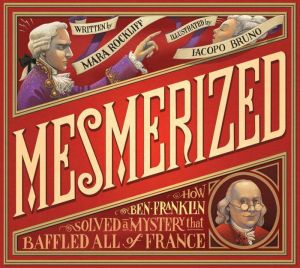 Title: Mesmerized: How Ben Franklin Solved a Mystery That Baffled All of France

During the American Revolution, Benjamin Franklin is tasked with visiting France and asking the King and Queen to help the revolutionaries in the war. In France, Dr. Mesmer has been using a wand to cure people of their ailments, claiming to have discovered a new force, such as gas or electricity. Doctors have become furious, due to their patients new interest in Dr. Mesmer, and take their claims to the King and Queen. The King and Queen are baffled and turn to Benjamin Franklin for help. He begins to conduct experiments, specifically having people blindfolded while Dr. Mesmer uses his wand. He found that if the person expected something to happen, something would – even without Dr. Mesmer using the wand. If they did not expect something to happen, nothing would – even with the force. This was the beginning of studies of the placebo effect! Benjamin Franklin then returns to the United States, where the revolution has been won!

Scientific inquiry and investigations with the scientific method

Libraries = Education. But we’re not focused on a letter grade or a test - we’re focused on life.

The Kendallville Public Library strives to provide you with the education you need right now, wherever you are in your life. Learning is a lifelong endeavor, and we are here, providing access to information…for life.